What CPAs Laugh About

Home » Blog » What CPAs Laugh About

Have you heard about the latest crazy tax deductions? How about the cholesterol deduction? The Willie Nelson write-off? The time machine? Or the stripper who bared her assets? These tax tales are part of the fifth installment of Bankrate’s 10 craziest tax deductions. The stories are culled from the files of CPAs across the country, some of whom have understandably requested anonymity. 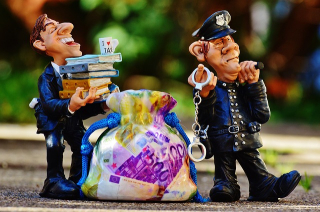 Keep in mind that falsely claiming deductions, knowingly underreporting income or otherwise playing fast and loose with a client’s federal income tax return is no laughing matter. Stay within the tax-law boundaries. Here are Bankrate’s Top 10:

You should see his energy-drink deduction

Some folks just can’t resist padding on a few extra miles to stretch their business mileage deduction (55 cents per mile for 2009). CPA William Miller of Chanhassen, Minn., has seen some road warriors in his time, but none compare to the client whose theme song could’ve been “On the Road Again.” “He was a traveling salesman, so there was some reasonableness to his taking mileage,” Miller says. “But the deduction he claimed would have required him to be driving continually all year. I did the math and he could have slept for maybe six or seven hours. “To claim those kinds of miles, your name had better be Willie Nelson.”

But it wouldn’t fit in the shoebox

Accountants are accustomed to receiving client tax receipts in rat’s-nest form, stuffed in all manner of shoeboxes, satchels, lunch totes and grocery bags. Bookkeeping can be a messy business after all, and documents frequently get misfiled and misplaced. But CPA Gail Rosen of Martinsville, N.J., couldn’t believe what one client overlooked. “Last year, I called a client to tell them where they stood on their tax return and all of a sudden heard a baby in the background,” she recalls. “I said, ‘Did you forget to tell me something?’ They did. Thank goodness babies cry!” You can bet that Gail now has that exemption ($3,650 in 2009) on account.

The diary of Tax E. Vader

CPA Martin Abo of Voorhees, N.J., can read his clients like a book. The problem is, sometimes it’s fiction.

“We had a contractor who was getting audited by the IRS and they requested that he show required substantiation for significant client development, aka meals and entertainment deductions,” Abo says. “He came back a week later with minimal receipts but did have a very effective diary showing so very much of the needed information—where, when, how much, names, etc.—for us to provide the agent.” “One problem—the diary was one of those any-year diaries that just go from Jan. 1 to Dec. 31, and the small print showed a copyright date one year after the calendar year being examined. Not only that, every page was written in the exact same color ink!” Busted! The contractor was politely told to find someone else to represent him.

In past editions of crazy tax deductions, business owners have tried various schemes to claim their dogs as a business expense. Some claimed them as a security expense. One insisted that he had hired his hound as an independent contractor. Another actually claimed his dog as a dependent. A New Jersey CPA can now give equal time to crafty cat lovers: “I looked on the client’s Schedule C for his sole proprietorship and he had an entry for ‘exterminating expense,” the accountant says. “Turns out he took his cat to the vet.”

CPA William Hanna runs a nice, family friendly office in South Bend, Ind. But every so often, a new client arrives to shake things up. “One time, a woman came in who was a self-employed entertainer at one of our local gentleman’s clubs. She was inquiring about deducting the cost of her tattoo,” he says. “Before I even had a chance to respond, the next thing I knew she had turned around and dropped trou and was showing me the tattoo to determine whether or not it was going to be deductible!” Once Hanna recovered, he explained that the tattoo in question was not deductible because it is not unique to her business. “Their work clothes, such as they are, are deductible because they are specific to their business; they aren’t everyday street clothes that you would wear to Kmart or Target. But you could have a tattoo and not be in that business,” Hanna says.

“On the other hand, if she’d used a boa constrictor in her show, she could deduct the cost of it.”

As long as we’re on the topic, an Oklahoma CPA had sent his condolences to a close client who had just lost his wife following a long battle with cancer. “My grief poured out for the family and I respected his great strength,” he said. But as the CPA found out, grief can take some strange turns. “My sympathy and respect vaporized quite quickly when the surviving spouse showed up in my office to get his tax return prepared the next spring,” the CPA says. “His charitable deductions included a list of all the deceased’s bras and panties priced quite liberally.” Not only did the client claim the deductions— the IRS allowed them.

If I’d only had a time machine

Walt Hatter, a Fort Worth, Texas, CPA, had heard some tall tales from taxpayers fishing for ways to write off their hobby. But one client beat them all. “I had a dentist client who came in and said he was in the fishing guide business,” Hatter said. “I said, ‘Are you serious?’ I didn’t believe him. He had to show me that he tried to make money at it.” When the dentist explained that he’d printed business cards, advertised for customers in magazines and devoted two days a week to his new enterprise, Hatter went against his instincts and agreed to allow him to file for a $9,000 loss and depreciate his equipment. Fortunately, the dentist was on the “deduct now, live the dream later” plan. “What’s funny is, this guy actually retired from being a dentist and went into guiding full time. It was a good lesson to me.”

To take an accurate pulse, of course!

Most of us don’t know the technical terms for the gadgets and gizmos in a doctor’s bag, right? So you can understand how Dallas CPA S. Miguel Reyna felt when he was asked to examine the tax return of a physician being audited by the IRS. “After reviewing his list of assets, we asked specifically, ‘What is this “time monitoring system” listed on your books?’” Reyna says. “He stammered a bit, then raised his shirt sleeve to point to his big sparkling Rolex!

Or we could simply deduct your cardiologist…

When you travel for a living, it’s easy to forget a minor detail about the various business lunches and dinners you attend. Then again, some restaurants are more conducive to accurate record-keeping than others, as Dallas CPA Ken Sibley found out. “We had an outside salesman client who ate more than two-thirds of his ‘meals’ at Hooters, but forgot who he entertained and what the business purpose of the meeting was,” he says. Perhaps he was in the control group for a new cholesterol-lowering drug.

Clearly, she was not an Aggie

Forgive Donna Wesling’s city upbringing. The Austin, Texas, CPA admits she wasn’t raised around livestock, which provided this moment of enlightenment when she was an accountant newbie transplanted to farm country. “Back then, there was the Investment Tax Credit (that) allowed for investment in new property,” she says. “One of our clients bought a herd of steers and I took investment credit on them when I prepared the return. “The CPA who reviewed the return called me to his office and told me I could not take the credit on steers. When I asked him why, he responded that you could only take the credit on breeding stock. To which I responded, ‘So?’ “He asked me if I knew what a steer was, and when I said I knew it was some sort of cow, he was too embarrassed to explain the process of how male cattle become steers. “The things they don’t teach you in college!”