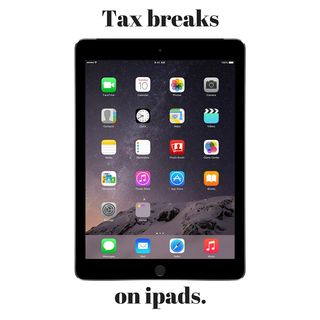 The following article appeared in the July 2015 issue of Small Business Tax Strategies (a publication worth checking out at www.SmallBizTax.net):

The IRS has informally indicated that iPads and other tablets will be treated like cell phones when employers provide them to employees.  Thus, employees won’t be taxed on the value of personal use, as long as the devices are provided primarily for business reasons rather than as a form of compensation.

Similarly, reimbursements made by employers to employees for personally owned iPads generally should not be subject to tax when used primarily for business.

Remember, this isn’t an official IRS regulation.  But I believe that iPads would fall under the “similar telecommunications equipment” discussed in IRS Notice 2011-72.  That notice mainly covered cell phones provided by employers to employees, but it makes sense that the IRS would expand it to tablets and iPads.