Tax Tip of the Week – Per Diem Rates

Home » Blog » Tax Tip of the Week – Per Diem Rates 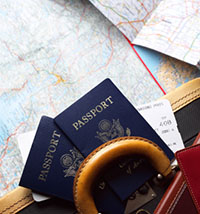 Keeping detailed records of employee travel expenses is a hassle. But there's a way your business can simplify matters without any tax downside: Use the IRS-approved "per diem rates. This way, employees don't have to account for every last cup of coffee or cab ride.  The reimbursements are tax-free to the employees up to certain prescribed limits.

Furthermore, your company can deduct the per-diem reimbursements in full. One exception: The usual 50% deduction limit on meal expenses still applies.

The per-diem allowances are actually the approved travel rates for government employees, but the IRS also allows companies to take advantage of them. However, the per diem rates cannot be used for an employee who owns more than 10% of the company.

Employers have a choice between two per diem rates. The first is based on the specific travel destination of the employee. The General Services Administration (GSA) sets the following each year:

The second method identifies each city as either a "high-cost" or "low-cost" area. The GSA adjusts the per diems for both areas each year. It recently announced the new rates and high-cost areas in effect for the government's 2010 fiscal year.

For the first nine months of 2009, the rate for most area was $158 per day and the rate for designated high-cost areas was $256 per day. For employer deductions purposes, $58 of the $256 high-cost area rate, and the$45 of the $158 rate for the other localities, must be allocated to meals.

By the way, the IRS often challenges deductions for business travel expenses, so it’s extremely important to meet all the requirements in this area.  If you’re unsure of the obligations or opportunities, don’t hesitate to call us at 915-857-8158.