Cheaper is Not Always Better 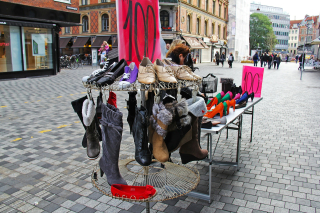 I work for a large insurance firm in the northwest, in an office with over 500 other employees.  Management recently decided to replace our existing phone system as the old system was no longer meeting our needs.  I and my co-workers were under the impression that they were going to update the system, as in "make an improvement", and that we would have late model phones with technological advancements galore.  Boy, were we in for a surprise.

One day a few weeks ago, we all came in to find new phones on our desks.  These were not the state-of-the-art communication devices we had in mind.  Instead of the sleek, sophisticated, caller IDing, multi-line handling, LCD displaying wonders of the modern age we all dreamed of, there was a simple phone with a keypad on the receiver…not unlike what you might have had at home 15 years ago.  In addition to the new phone, there was a sheet which explained in graphically painful detail exactly which series of buttons one would have to push in order to make this thing function properly.  We had to now enter a digit to put someone on hold, enter a three digit code to transfer someone (one digit, dial tone, two digits) and enter a ridiculously long series of numbers to access our voicemail.

Needless to say, we were in shock.  I knew it wouldn't take long before the roars of complaining would drown out the usual office din.  Sure enough, by lunchtime, our office manager came in to tell everyone that we were simply going to "try it out for a while" and that the company had saved thousands by choosing this option.  I and the other employees were fairly certain that we had already lost thousands in reduced productivity that morning alone.  Oh, well…it's their company; we just bring in the money for them.

For the next few days, we tried to get used to saying "hold, please, while I transfer you", removing the receiver from our faces and trying not to curse as we made a lame-duck attempt at pressing keys, listening and pressing more keys.  It was a nightmare.  We were getting pretty fed up with it but just assumed that this was what we would have to deal with.  Then, out of the blue, we came in one day to find real phones with real features at our desks.  No more looking at the receiver while we frantically tried to key in numbers fast enough not to drop the call.  No more ten digit voicemail "pins".  No more of having no idea who was calling or where the call came from.  Ahhhh, relief at last.

Later the same day, we heard a rumor circulating around the office that the VP of operations had returned from a two week trip to New York.  His words, upon seeing one of the phones management had originally purchased on his desk were, "get rid of them".  All it took were those four words from a higher-up to set things right. Unbelievable.